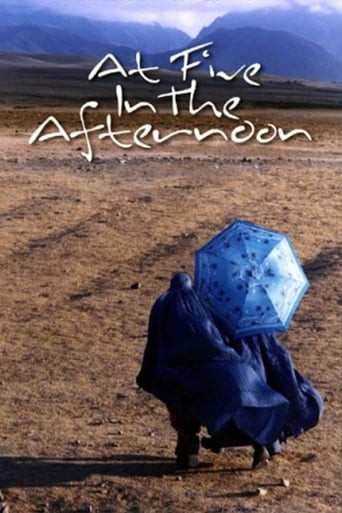 At Five in the Afternoon

Watch At Five in the Afternoon

Nogreh is a young Afghani woman living with her father and her sister-in-law, Leylomah, whose husband, Akhtar, is missing. Beyond the issue of Akhtar, Leylomah is most concerned with how to feed her baby. She cannot provide milk for her baby as her own hunger is preventing her from lactating. Nogreh, however, aspires toward a life in a western styled democracy. Although the Taliban are no longer in power in Afghanistan, traditional forces are still active in the country. Nogreh often displays signs of rebellion, such as wearing a pair of white pumps instead of the traditional slipper beneath her burqa. But mostly, Nogreh wants to be educated. Without her father's knowledge, Nogreh is attending a secular girls school. Ultimately, she wants to become President of Afghanistan. With the help of a Pakistani refugee who likes her as a woman, Nogreh tries to understand exactly what forces led to current world leaders being elected, those forces which she wants to emulate.