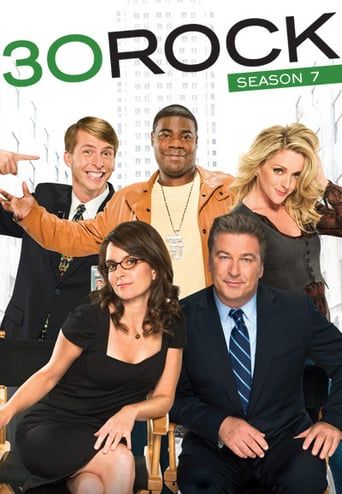 The seventh and final season of 30 Rock, an American television comedy series on the NBC network in the United States, began airing on October 4, 2012. 30 Rock was renewed for a seventh and final season of 13 episodes on May 10, 2012, to air on Thursdays at 8:00/7:00c. The hour-long series finale wrapped filming on December 19, 2012 and aired on January 31, 2013. Alec Baldwin reportedly approached NBC and offered to cut his pay in order for 30 Rock to be renewed for a full seventh and eighth season. He stated the following on October 4, 2012: "I offered NBC to cut my pay 20% in order to have a full 7th and 8th seasons of 30 Rock. I realize times have changed". The season drew 13 Primetime Emmy Award nominations, the most of any comedy series for the year 2013, ultimately winning two, including one for Tina Fey and Tracey Wigfield's writing for the series finale, "Last Lunch". In the United Kingdom the rights for the seventh season were not picked up by previous broadcaster Comedy Central leaving UK fans unable to watch the show. As yet there is also no news of a DVD release outside of the USA.

The "TGS" gang returning from hiatus, only to be shocked by Jack's awful fall programming lineup. Meanwhile, bridezilla Jenna taps Liz to be her maid of honor, and Tracy is invited to a dinner party by Kenneth and Hazel.

Jack and Liz find themselves at odds over political satire at "TGS". Criss and Liz make a surprising relationship breakthrough. Meanwhile, Jenna, discouraged by the disappointing sales of her summer dance hit, is thrilled to learn that Kenneth's mother and her boyfriend still buy music.

Liz works to prove to Tracy that women are funny while simultaneously attempting to head off a meltdown from Jenna after some negative publicity. Jack tries out an unconventional dating strategy.

Liz and Jack find themselves battling to influence voters in the upcoming presidential election. Meanwhile, as Jenna goes to great lengths to please her new fan base, the writers seek out new ways to mess with her.

Realizing that Jenna could decide the Presidential election, Liz and Jack stage a debate to win her support and her followers. Kenneth turns to Tracy for advice on how to be an informed voter, while Pete tries to recreate the magic of the 2008 election.

Tracy and Jack engage in a battle of wits after Tracy depicts Jack as a villain in his latest project. On Jack's advice, Liz puts her own needs ahead of those of "TGS." Meanwhile, Jenna tries to shield Kenneth from Hazel's manipulation but her own selfishness gets in the way.

After an encounter with Dennis Duffy, Liz and Criss decide to take drastic measures to start a family. As Liz looks toward the future, Jack and Jenna evaluate their own self-worth, and Tracy laments a shocking medical diagnosis.

Jenna annoys Liz with her wedding envy, Jack devises a plan to avoid disappointing his visiting mother and Tracy attempts to cheer up Kenneth.

When Jack persuades Liz to go to Florida with him, they make a shocking discovery about his mother. Jenna and Tracy assume responsibility for the show in Liz's absence, resulting in disaster for Kenneth.

As her new kids arrive, Liz scrambles to save TGS from cancellation. Jack finds a new NBC president.

Liz has trouble adjusting to being a stay-at-home mother. Jack takes stock of his life, and Tracy struggles to get on without Kenneth.

Jenna prepares an emotional farewell song as the cast and crew reunite for one final "TGS".