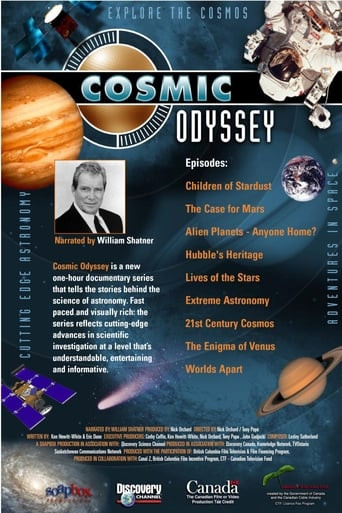 Cosmic Odyssey is a 2002 documentary television series about the cosmos, created by Avanti Pictures, narrated by William Shatner, and produced by Soapbox Entertainment for The Discovery Channel. In 2003, Schlessinger Media released the series in VHS video format. As of 2007, the series is syndicated on The Science Channel. "...Cosmic Odyssey tells the stories behind the science of astronomy in an informative and entertaining way. Fast-paced and visually rich, viewers journey to exotic destinations within our solar system and beyond! From moons and planets to comets and asteroids, this series features scientists on the cutting edge as they investigate cosmic mysteries, including the birth and death of stars, the structure of the universe and the search for extraterrestrial life. Each program includes a Teacher's Guide."