Watch Seven of One

Seven of One was a British comedy series that aired on BBC2 in 1973. Starring Ronnie Barker, 7 of One is a series of seven separate comedies that would serve as possible pilots for sitcoms. Originally it was to be called Six of One, which Barker planned to follow up with another series called Half Dozen of the Other. This was a BBC version of a similar showcase for LWT called Six Dates with Barker created in 1971. 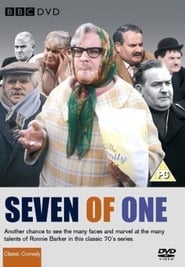