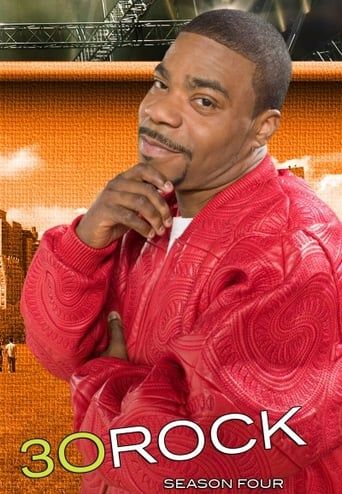 The fourth season of 30 Rock, an American television comedy series, consists of 22 episodes and began airing on October 15, 2009, on the NBC network in the United States. The season was produced by Broadway Video, Little Stranger, and NBC Universal; the executive producers were series creator Tina Fey, Lorne Michaels, Marci Klein, David Miner, and Robert Carlock. 30 Rock is centered on The Girlie Show with Tracy Jordan, a fictional sketch comedy series, and its head writer Liz Lemon, portrayed by Fey. The series follows Lemon as she juggles her job and her personal life. Early in the season Jack Donaghy and Liz work to find a new cast member for TGS. The season also sees NBC being purchased by the fictional company Kabletown, a fictionalized depiction of the acquisition of NBC Universal by cable company Comcast. Additionally, Liz has an ongoing relationship with a man she thought might be her "Future Husband" later in the season. During the 2009–2010 upfront presentation on May 19, 2009, NBC announced that the show's fourth season, following the precedent set by its third season, would premiere several weeks behind the rest of the network's Thursday night lineup following a multi-week run of Saturday Night Live Weekend Update Thursday specials. On June 25, NBC released its full fall premiere schedule, with 30 Rock returning on October 15, 2009. The fourth season aired under NBC's promotional banner "Comedy Night Done Right" on Thursdays at 9:30 p.m. Eastern Time. The season drew 15 Primetime Emmy Award nominations, down from its previous record breaking totals of 17 and 22 in the second and third seasons, respectively. The season was released on DVD in the United States on September 21, 2010, as a three-disc set.

Jack demands changes to make TGS both more relatable to average Americans and more cost-conscious and sends Liz and Pete to search for fresh blood. Kenneth organizes a strike by the pages.

Jack tries to protect his job and the company when Devin returns to seek revenge; Tracy and Jenna try to make Liz's life miserable; Kenneth volunteers at an animal shelter.

Jack and Liz search for new talent as they travel to Kenneth's hometown. Jenna makes an attempt to become friends with the writers. Tracy fears he may die next after a pair of celebrities pass away.

Liz and Pete try to rig the audition process; Tracy and Jenna decide they should conduct their own search for the next 'TGS' star.

The crew awaits the arrival of the new cast member. Tracy and Jenna rethink how they treat Kenneth. Jack offers Liz a talk show.

When Liz's apartment building is converted to condos she has to make a drastic change to her living arrangements. Meanwhile, Jack and Tracy reevaluate their plans for parenthood and Kenneth is on a mission to make "TGS" greener during NBC's annual "Green Week."

The tables are turned when production begins on Liz’s new talk show, “Dealbreakers,” and she experiences what its like to walk a mile in Jenna’s shoes. Jack, dealing with pressure from Devin, calculates to make “Dealbreakers” a success. Meanwhile, Tracy takes on the ultimate Hollywood challenge in order to prove his commitment to his wife. Everyone pitches in to help Tracy reach his goal including Kenneth, Dotcom and Grizz.

Jack’s interest in a new social networking site unexpectedly reconnects him with a high school crush. Kenneth tries to organize a Secret Santa Fun Swap, but not without resistance from some of the staff members. Meanwhile, Liz battles the task of buying a gift that’s good enough for Jack, and Jenna is horrified at the prospect of sharing her annual Christmas solo.

Following a wild New Year's Eve, Jack has to try to repair the damage he did after leaving a drunken message on an ex's voicemail. Meanwhile, Jenna tries to get into a relationship with James Franco in order to cover up his secret; and Liz, after accidentally "outing" her cousin to his family, welcomes him to New York City; and Tracy finds new respect for women.

Jack tries to squash the burgeoning relationship between Liz and Danny. Tracy asks Sue to be in his entourage. Jenna tries out for Gossip Girl.

Hoping to boost staffers' spirits, Liz takes TGS on the road, but Jack takes over for his own reasons, and the staff find reasons to blame Liz for all that's wrong in their lives.

Jenna's mother comes to visit, and she looks to Jack to help. Frank moves in with Liz as a boarder, and they decide to aid one another stop some bad habits.

Liz searches for a man she met in her dentist's waiting room. Jack fears for the future when he learns a cable company may have its sights on NBC. Jenna helps Tracy try to get a Tony award.

Jack needs to reestablish himself within the new corporate structure. Liz and Wesley continually run into each other, making them consider fate's role in their lives. Tracy's nanny writes an exposé.

Liz reevaluates her feelings for an old flame, Floyd, when he returns with big news, and Jack Donaghy teaches Danny Baker the finer points of pranks after the TGS writers play a trick on him. Jenna Maroney and Tracy Jordan see Kenneth Parcell in a disturbing new light after they spend a very long day listening to him tell stories about his childhood.

Liz Lemon starts making an effort to date by attending singles events with Jenna Maroney, and Jack Donaghy feels forced to choose between childhood love, Nancy Donovan and news anchor Avery Jessup. Meanwhile, a racist comment sparks an office-wide debate on affirmative action and leaves Toofer with a big decision to make regarding his future at TGS.

Liz discovers that the TGS staff have been excluding her from their weekly hangouts, and strives to prove that she can be fun. Jack must choose between janitors and the shift time they both want, and Kenneth aids Tracy Jordan in being a good husband.

Wedding fever hits TGS, leaving Liz to sort out Grizz's dilemma when both Tracy and Dot Com want to be his best man. Jenna's new boyfriend, Paul, raises Liz and Pete's suspicions, while Jack is finally forced to deal with the death of his mentor, Don Geiss, when Geiss leaves him a strange but meaningful inheritance.

Jack becomes even more entangled in his love triangle between Avery Jessup and Nancy Donovan, and he turns for advice to Liz, who is focusing on her own romantic problems. When Liz can't find a date to Floyd's wedding, she revisits her old boyfriends in hope that a spark will reignite. Meanwhile, Tracy continues his journey to earn his egot.

Liz questions fate when she meets the man of her dreams, while Jack's love triangle between high school love, Nancy Donovan, and CNBC anchor, Avery Jessup, comes to a head. Meanwhile, Jenna's boyfriend is confronted with a similar dilemma when his desire for another woman threatens to ruin their relationship, and Kenneth, with the help of Tracy, tries to avoid a promotion that would land him in LA.